Hot topics close
Home Wyn Jones A lion in sheep's clothing! Wyn Jones is the Welsh farmer with 700 ewes who's ready to ram the Boks on Saturday... as ...

A lion in sheep's clothing! Wyn Jones is the Welsh farmer with 700 ewes who's ready to ram the Boks on Saturday... as ...

Daily Mail
Share on FacebookShare Share on TwitterTweet
EXCLUSIVE INTERVIEW BY CHRIS FOY: Jones sees parallels between his two lives. They require similar traits, which might explain why so many players come from similar backgrounds.
A lion in sheep's clothing! Wyn Jones is the Welsh farmer with 700 ewes who's ready to ram the Boks on Saturday... as prop looks to avenge World Cup semi-final defeat by South Africa two years ago

By Chris Foy for the Daily Mail

Back on the family farm outside Llandovery, they have 400 acres of land, 100 cattle, 700 ewes and epic valley views, even on a grey day. That is Wyn Jones’ other life, away from rugby – and he is grateful for both.

‘I am fortunate to be in two different worlds,’ said the Wales prop, who has emerged as a front-runner for inclusion in the Lions’ Test XV against South Africa on Saturday. ‘I play the game I love but also come home and be a farmer, which I’ve grown up with and is embroidered into me.’

For now, understandably, rugby is the focus for the 29-year-old Scarlets loosehead. He has become a stalwart of the Welsh pack and was a leading figure in their Six Nations title triumph, which in turn propelled him into the Lions squad as a form candidate for the No 1 shirt. 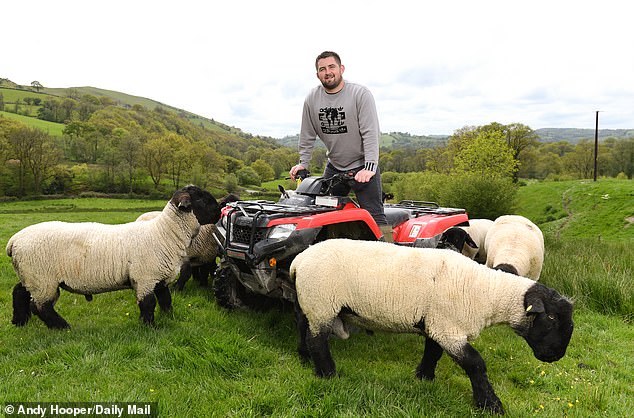 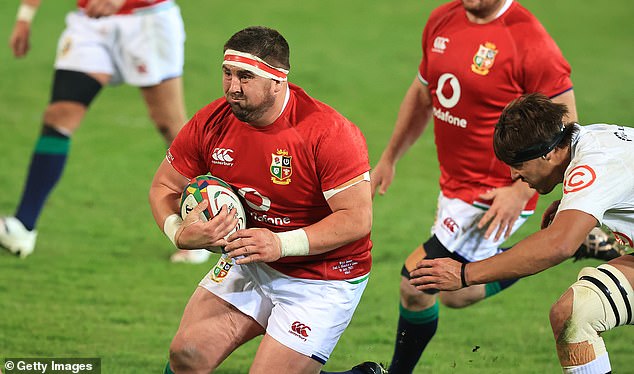 But he fitted in farm duties wherever possible before this tour and he will do so again when he returns – and whenever his oval-ball career ends.

Jones sees parallels between his two lives. They require similar traits, which might explain why so many players – especially in the front row – come from the sort of background he comes from.

‘Farming instils a bit of discipline which is also needed in rugby,’ he said. ‘There are rams in the field which need to be fed every night – so they get fed every night. You can’t just think, “I can’t be bothered with that today”. You just have to get on with it – a bit like doing conditioning work in rugby. It might not be enjoyable but you just get your head down and get on with it.

‘At the Scarlets at one point, there were five or six of us with farming backgrounds in the front row alone. I suppose you do manual work at a young age without thinking about it really. You go around chasing and catching a lamb when you’re quite young and as the lamb grows, you keep catching them and you naturally get stronger.

‘Sometimes, especially with scrummaging, it’s about digging-in within yourself and you won’t let them beat you. With farming, you have to dig in too – it’s not the easiest of jobs. I suppose you build up mental resilience over time, without thinking about it really.’

The man they call ‘sausage’ is content in his picturesque West Wales habitat, despite admitting that a stint playing in Japan might appeal one day. He and his fiancée are due to marry in September, after having to postpone their wedding last summer on COVID grounds.

There is a tendency for Jones’s two worlds to collide, which has forced his wife-to-be to cover for his absence.

‘Me and my girlfriend, Jen, have a little flock of Suffolk ewes ourselves,’ he said. ‘I had to send Jen to Monmouth market to buy two sheep for me which I had pencilled in, but we had Ireland away. We played them on Friday night and flew back on the Saturday so I sent her there. I think she was pretty nervous but she’s getting more confident now, which is good.’ 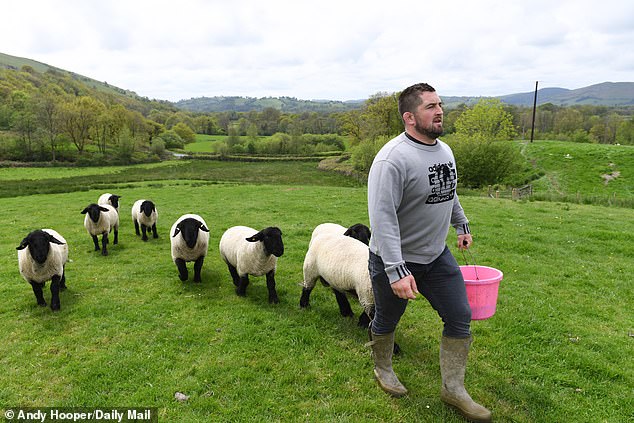 Rugby and farming had to co-exist when Jones was studying Agriculture and Animal Science at university, while establishing himself at the Scarlets. He insisted on completing his degree, which meant gruelling drives on winding country roads four times a week; from Llandovery to Aberystwyth to Llanelli and home again; around 150 miles each day without the respite of cruising along a motorway.

Playing semi-pro for Llandovery toughened him up. ‘When I was first playing with the Scarlets, I remember playing against Deacon Manu (former Fiji prop and captain), who was at the Scarlets as well,’ he said. ‘He was an old head, but he’d been demoted to play for Llanelli against Llandovery.

‘I went up against him and when a scrum went down, he hit me straight on my nose. I thought, “What do I do here?”. I clipped him back and I split him open, so I was just thinking, “Training on Monday is going to be a nightmare”, because I was only a young guy.

‘But to be fair, he came up to me and said, “I fully deserved it, I gave you one first and you gave me one back, even better”. I earned his respect from that. He really helped me along my way after that.’

Five years ago, Jones was still turning out for Llandovery, but by the summer of 2017 he had earned a Wales call-up. Making his first appearance in New Zealand, while the Lions were touring there, really opened his eyes about the epic drama of the fabled British and Irish crusades. 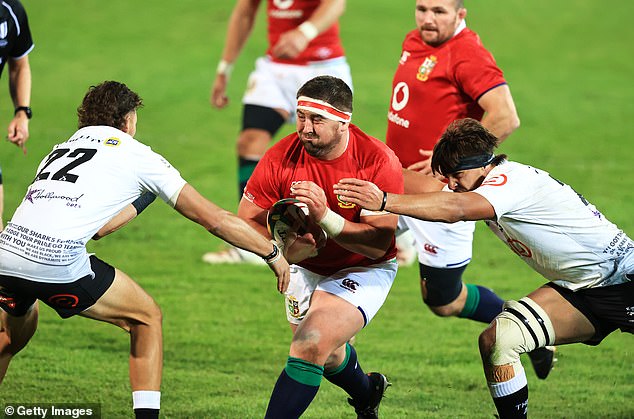 ‘My debut was against Tonga at Eden Park – which isn’t a bad way to start,’ he said. ‘Everywhere we went, you saw Lions banners, Lions buses and people wearing Lions kit. I remember thinking, “Woah, this is a big deal”.

‘You could feel the buzz whenever the Lions were playing. I remember watching a game in Auckland and the atmosphere in the local pub next to the hotel was something else, so I can’t imagine what it would be like in the actual stadium. It all just felt like such a massive occasion and as a player it made you really want to be part of something like that.’

Now, Jones is part of it. He sat in his car to watch the Lions squad announcement in May, having dashed away at the end of a Scarlets training session, still in his kit. He wanted to absorb the news on his own, for better or worse.

Once it was known that he had been picked, he received a stack of cards from the proud people of Llandovery and his parents were presented with a bottle of champagne by Barry Williams, the local hooker who was a Lion on the triumphant 1997 tour.

There is no doubt about what awaits Warren Gatland’s squad over the coming weeks. All the Welsh players – as well as the English ones – know from bitter experience at the World Cup. ‘They’ve got an unbelievable front five and they’re a big team from 1-15,’ said Jones. ‘They will try to dominate the set piece and bring on a fresh front five, so it will be a great challenge. 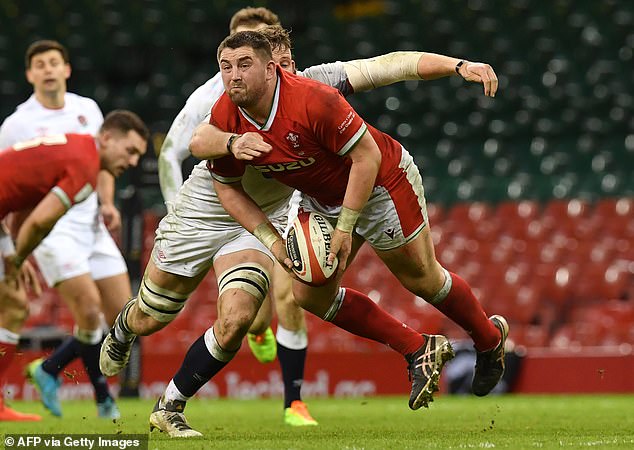 ‘There’s a sense for us Welsh boys that we want to get revenge for that semi-final defeat. When I came off, I thought we were going to win. We were pretty close to them and I thought the boys would do it, but it wasn’t to be. We want to get one over them this time.’

One striking image from that close encounter in Yokohama was of Jones heroically standing his ground to win a breakdown penalty as half the Springbok pack ploughed into him like a run-away train. He recalls the moment vividly.

‘I remember looking up and it was Etzebeth and Kitschoff coming towards me,’ said Jones. ‘As I went over the ball I just closed my eyes and thought, “Don’t look up again, whatever you do”! I won the penalty on our 10-metre line, but I’m sure I’ve been four inches shorter ever since!’

He has carried on putting his head in harm’s way, causing more problems for opponents than for himself. During this year’s Six Nations, three teams beaten by Wales were rocked by a red card setback and two of them came as a result of Jones coming to harm in rucks.

He was the victim of an illegal clear-out by Scotland prop and current Lions team-mate Zander Fagerson, while France lock Paul Willemse was sent off for making contact with Jones’s eye. 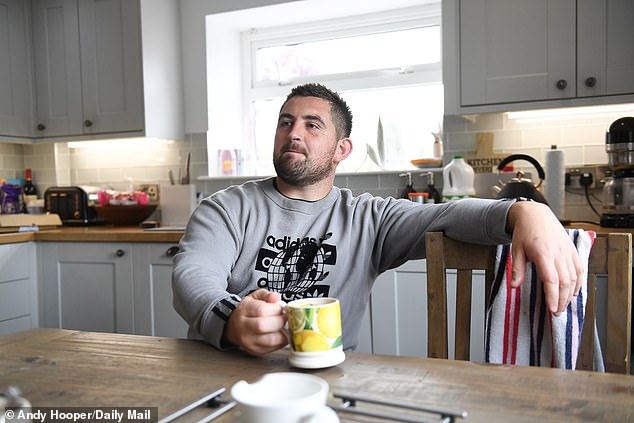 There were claims – led by Fagerson’s outraged brother, Matt – that he had been theatrical in his reaction to the foul play.

He emphatically denies the charge, saying: ‘I was involved in two (red cards) and it’s probably because I was sticking my head in the ruck. I maybe get my head in the way more than some other boys. I feel sorry for other boys getting carded and that’s tough but it’s part of the game now; if you make contact with the head you’re off.

‘I don’t think either of them went out with the intention to hurt anyone. I don’t think there was any malice – it’s not like a stamp on the head – but it’s all part of the game now. It’s all black and white. It’s just unfortunate it was me twice. I got a bit of stick.’ So was it play-acting? ‘Definitely not.’

The Lions will need Jones to keep competing at the breakdown when they confront the mighty Boks – and keep taking any punishment without complaint. Before he returns to his farming life, his rugby life is poised to reach a thunderous peak.