St John asks Kiwis to show their hearts of gold

SunLive
Share on FacebookShare Share on TwitterTweet
St John is calling on the New Zealand public to show their “hearts of gold” by supporting its annual appeal which...

St John is calling on the New Zealand public to show their “hearts of gold” by supporting its annual appeal which runs this week.

St John’s Heart of Gold Annual Appeal is the most significant fundraising campaign of the calendar year and the goal is to raise $1.8m for much needed ambulances and lifesaving equipment.

“The appeal captures the spirit of what St John is all about – having a heart and helping people in need. We are grateful for the tremendous support and generosity of the public that enables our ambulance staff to deliver their lifesaving care to communities right across Aotearoa,” says St John Chief Executive, Peter Bradley.

Despite months of planning and preparation, last year’s nationwide street collections and campaign were cancelled due to the COVID-19 lockdown and the economic uncertainty posed on New Zealanders.

“As a charitable organisation, we are grateful for the funding we receive from Government, but St John has to fundraise to plug a gap in our operating costs in order to maintain the highest standard of lifesaving equipment and ambulances,” says Peter.

“Last year we received over half a million emergency calls into our 111 Ambulance Communication Centres. With an ageing population and increasing demand for our services every year, we need the public’s support more than ever.”

It is St John’s emergency ambulance service that has been there numerous times for radio and television presenter Jason Reeves, and his family.

When Jason’s son Olly had an anaphylactic episode in January, Jason and his wife Louise found themselves in a horrifying situation. Despite two shots of adrenaline, their five-year-old struggled to breathe and developed a rash, urgently needing an ambulance. The St John ambulance officers quickly arrived on scene and provided the critical care Olly needed and transported him to hospital where he made a positive recovery. 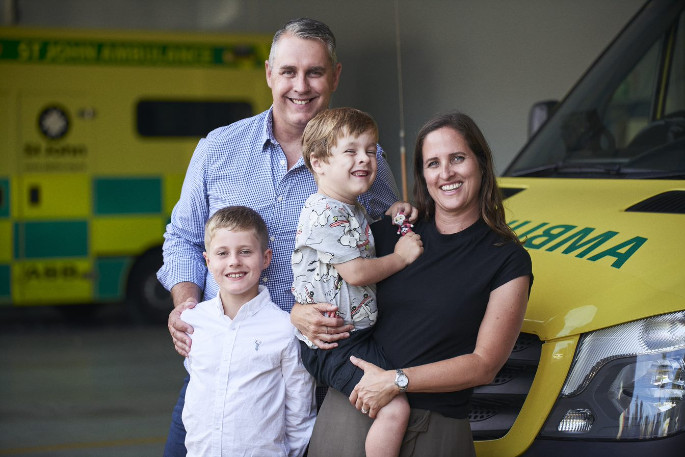 Jason and Louise Reeves with their children Max and Olly. Photo: Supplied.

“We fully believe we owe St John and its amazing staff a hell of a lot,” says Jason. “Truly try and get behind St John because we need them, and they need us to help them.”

St John provides emergency ambulance services to 90 per cent of New Zealanders and covers 97 per cent of the country’s geographical area. St John received over 540,000 emergency calls into 111 Ambulance Communications centres and treated and/or transported over 460,000 patients in the last financial year from July 1 2019 – June 30 2020.

St John is made up of a mix of full-time paid employees and volunteer staff. St John has contracts with Ministry of Health and ACC who fund approximately 78 per cent of the operating costs for the ambulance service. The balance is made up from ambulance part charges, third-party contracts and fundraising.

Along with the emergency ambulance service, St John operates a significant number of community health programmes, social enterprises and other activities which help build community resilience.

To cater to an increasingly cashless society, this year St John has partnered with ASB and Giv2 to include the option of donating via a QR code, which will be available on collection buckets, posters and on TVNZ OnDemand advertisements.

While St John’s Heart of Gold Annual Appeal runs for a week, there will be activity throughout April and St John is encouraging everyone, including businesses, schools, and organisations throughout the country to join in the fun and support this year’s campaign however they can.

Donations can be made in any ASB branch across New Zealand, online at heartofgold.org.nz, by calling 0800 ST JOHN, or to St John and ASB volunteer street collectors throughout New Zealand.

The 2021 Heart of Gold Annual Appeal is supported by St John’s valuable business partners and sponsors, including ASB Bank – branches across Aotearoa will be running their own fundraising activities; Z Energy – will donate a percentage of coffee sales in April; Pizza Hut – is offering a special St John meal deal with a portion from each meal sold going to St John; and Bunnings – is enabling St John to host sausage sizzles at its branches across the country.