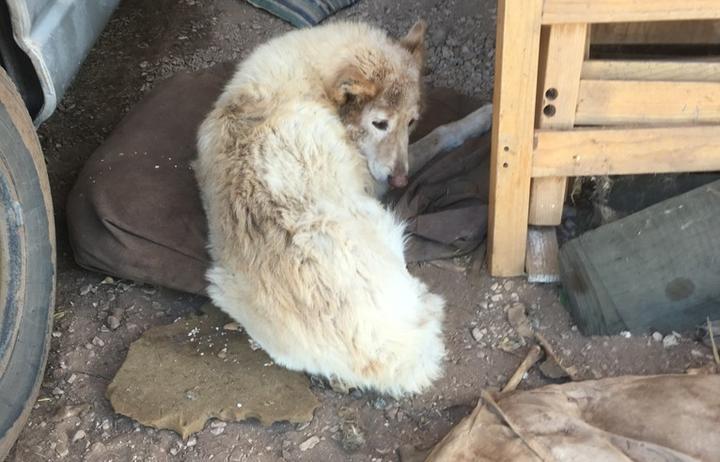 Heyley was not even able to stand and had be enthanased at the Baroota property in South Australia. Photo: Supplied / RSPCA

Animal breeder Dora Ryan was found guilty of 33 charges in relation to 27 dogs and five horses she kept on a property at Baroota, near Port Pirie.

The animals were found to have been denied veterinary care, were living in poor conditions and suffering mistreatment and malnurioushment.

She failed to appear for a sentencing hearing in March and is believed to have moved to New Zealand. An arrest warrant was also issued for her in November 2020, and remains in place.

In the first inspection in May 2017, Ryan was found to have kept 75 dogs (including puppies), 45 horses, seven sheep and 25 chickens on the Baroota property.

Although not all the animals were the subject of charges, the RSPCA said Ryan had too many animals on the property to adequately care for them.

Inspectors seized 27 of the most affected dogs - 23 Pomeranians and four German shepherds. 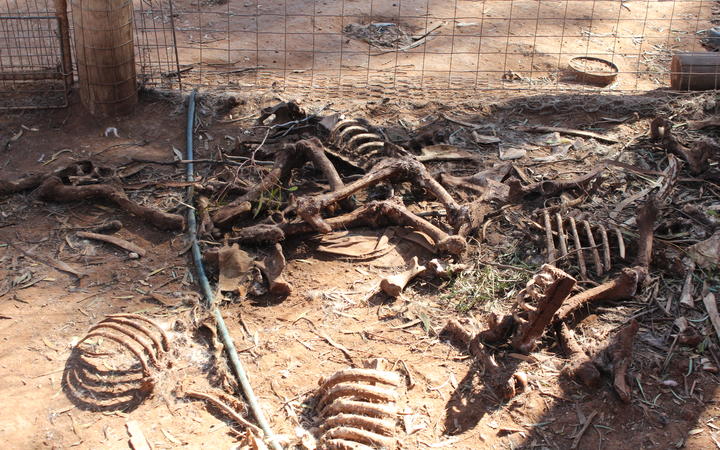 Piles of rotten bones were found after an inspection of a Baroota property in South Australia, where puppy farmer Dora Ryan kept animals. Photo: Supplied / RSPCA

Three of them were found to be suffering extremely painful symptoms and had to be euthanised, while the other - named Heyley - was not even able to stand and had be enthanised at the property.

At the Port Pirie Magistrates Court on March 2020, Magistrate Mark Semmens said "given the severity, duration and nature of Heyley's conditions, she should have been the subject of ongoing and regular veterinary care up until 3 May 2017".

Magistrate Semmens found Ryan guilty of 27 counts of ill treatment of an animal.

In May 2019, five horses and a Pomeranian dog were seized by RSPCA inspectors from the same property following another cruelty report. They were among 86 dogs and 56 horses found on the property.

The inspectors observed no evidence of feed in the paddocks containing the horses, other than in one pen containing a healthy stallion. In the absence of food, some of the horses were eating their own faeces.

One of the horses, named Indigo Violet, was found to be 140kg underweight, according to a veterinary report. She died four days after being taken into care due to the chronic malnourishment. 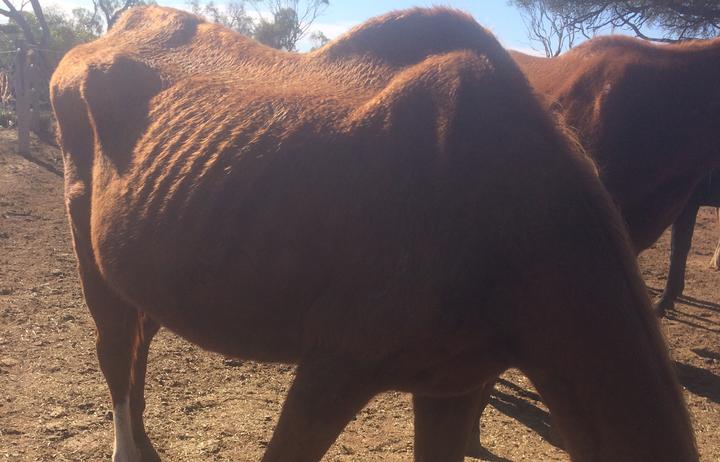 Indigo Violet was found to be 140kg underweight at the Baroota property, according to a veterinary report. Photo: Supplied / RSPCA

The other four horses were also in emaciated condition but managed to make a full recovery.

The Pomeranian dog, which was found to be suffering from renal and urinary disease and dislocations of both knees, had to be euthanased.

Ryan was found guilty of six counts of ill treatment of an animal at the Port Pirie Magistrates Court in November last year.

RSPCA South Australia chief inspector Andrea Lewis said Ryan could not be sentenced while absent, meaning the case was yet to be finalised.

However, she described Ryan's conviction on cruelty charges relating to the Baroota puppy farm as positive.

"It's deeply concerning that Ms Ryan chose not to attend court to finalise the judicial process in this very serious matter, and appears instead now to be living in New Zealand," Lewis said.

"Nonetheless, the magistrate's verdict in this milestone case exemplifies what are - and aren't - acceptable living conditions for animals.

RSPCA said Ryan was believed to have taken a number of animals with her to New Zealand, including some dogs, but was not sure what she was going to do with them.

"We hope this case serves as a disincentive for anyone who might be thinking of generating income by breeding puppies without regard for their welfare and current legislative requirements."

RSPCA also urged all puppy buyers to do their research beforehand.

SPCA in New Zealand said it had been notified and was looking into the matter.