5 takeaways from Mavs' stellar showing in Game 6 vs. Suns 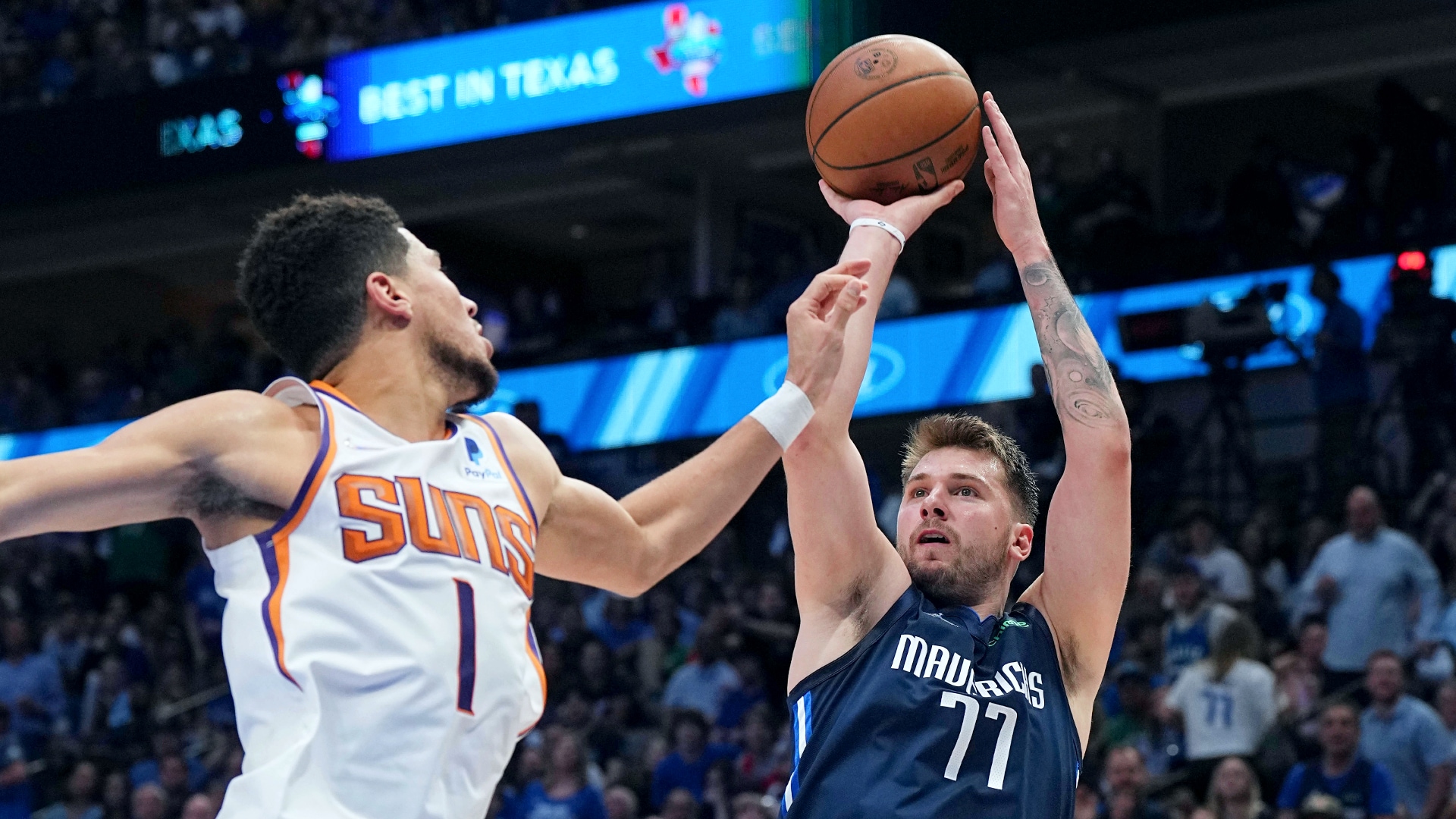 Luka Doncic scores 33 and has a near triple-double as Dallas dominates in a 113-86 Game 6 win.

DALLAS — With ushers snugly gripping thick gold ropes to block out fans loitering in the bowels of the arena, the Dallas Mavericks strolled through the tunnel with a perky bounce on the heels of Thursday’s 113-86 win over Phoenix in Game 6 of the Western Conference semifinals.

“One more, one more,” a couple players blurted, before disappearing into the locker room.

That’s where we stand in this best-of-seven series tied 3-3 ahead of Sunday’s deciding Game 7 in Phoenix.

“We’ve got some dogs over here,” Mavericks forward Reggie Bullock said, after bouncing back from a scoreless Game 5 with a postseason career-high 19 points Thursday to go with seven rebounds and a pair of steals. “I’m pretty sure no one has us winning Game 7. We keep our heads down, we keep working, and we believe in our abilities that we put on both ends of the floor. The fans give us a lot of energy at home. We just came out and poured it out tonight.”

Now, it’s up to the Phoenix Suns to mop up the mistakes and bad memories from a missed Game 6 elimination opportunity once they return home to the friendly confines of Footprint Center with one last shot to advance to the conference finals for the second-straight season.

Dallas snapped a four-game skid in elimination games, but it hasn’t won in Phoenix since 2019.

“[I] don’t have enough time to talk about everything that’s eating at me,” Suns coach Monty Williams said. “I didn’t think we understood the desperation they were gonna play with. Couple that with the turnovers that we had tonight, it’s a recipe for what we just got.”

Here, we cook up five takeaways from a Phoenix turnover-fest that ultimately cost it Game 6:

1. Sealed with some steals

Dallas throttled Phoenix by 27 points, and if you look at the damage the Mavericks inflicted feasting on turnovers, you’ll quickly understand that’s exactly what determined the outcome of the game.

The top-seed Suns committed a season-high 22 turnovers, leading to 29 points from Dallas, thanks to Luka Doncic (four), Davis Bertans (four), Jalen Brunson (three), and Bullock (two) combining for 13 of the club’s 16 steals. We tend to rave incessantly about Doncic’s offensive prowess, but the superstar generated three of his steals in the first half alone, as the home team led by as many as 17 points over the first two quarters.

From scoring to rebounding to racking up assists, Luka Doncic has sizzled in the West semis.

Dallas’ 16 steals registered as a season-best and the second-most by the club in a postseason contest in 18 years (April 24, 2004), when it picked Sacramento’s pocket for 19 steals. Doncic, meanwhile, scored a game-high 33 points to go with 11 rebounds, eight assists and four steals. According to Stathead, Doncic ranks as just the fifth player in league annals to post that statline in a playoff outing, joining the likes of Jimmy Butler, LeBron James, Michael Jordan, and Russell Westbrook.

In scoring 18 of his 33 points in the first half, Doncic put together his fifth career postseason game with at least 30 points, 10 rebounds and 5 assists, which ranks as the second-most all-time for a player before the age of 24. James is the only player with more such games (7) before hitting that age.

The Mavs' 16 steals in Game 6 is the 2nd most in a playoff game in @dallasmavs franchise history. #MFFL pic.twitter.com/Pp2A2WYPzU

“I don’t care about stats if we win,” Doncic said. “We won this game on the defensive end, and now we have another game. It’s the playoffs, and we are going to give our everything.”

In Game 6, the Mavericks took it all from the visiting Suns, which averaged 13 turnovers in the regular season, but are now up to 16 giveaways per game in this series.

Dallas gave up just 6 points off its 7 turnovers on the night.

That’s what you wonder about veteran guard Chris Paul when you examine his numbers in Phoenix’s three losses in this series. Paul hasn’t played badly, considering he’s shot 11 of 20 from the field and 6 of 10 from deep in the losses. But he’s scored a total of 30 points in the defeats with an equal number of personal fouls (15) to assists (15), not to mention 14 turnovers, including five giveaways in Game 6.

Over his last four games, Paul is averaging 9.3 points, 6.3 assists and 4.5 turnovers per game.

Since Game 2, Chris Paul is averaging more than 4 turnovers and fewer than 7 assists per game in the series against Dallas.

One problem is he just hasn’t gotten up a ton of shots (6.7 per game in the three losses), which is partially a credit to the way Mavericks coach Jason Kidd has handled defending the vet with a variety of looks and players. By design on the Dallas coach’s part, the 37-year-old veteran gets virtually no rest when he’s on the floor because the Mavericks continue to make Paul work on both ends of the floor. Dallas runs Paul through screens when he’s defending. The Mavericks are also picking up the veteran full court when he’s bringing up the ball, which saps his energy and effectiveness on offense.

“It’s tough. I’ve always said that turnovers are like interceptions,” Paul said. “So, when we turn the ball over, they’re getting transition 3s. Once again, the other guys got going, and we’ve seen that movie before.”

The Suns admitted their half-court offense was virtually non-existent, with Williams saying the Mavericks “sped us up,” which ultimately “was one of the reasons we threw it around the gym tonight.”

Phoenix scored a season-low 86 points, marking the first time the Suns failed to put at least 90 on the board. In addition, Phoenix shot a playoff-low 39.7% from the field. The Suns are now 2-5 this season when they connect at a clip lower than 40%.

The Mavs and Suns are now set for a Game 7 in their West semifinal series.

“The turnovers were terrible, unacceptable,” center Deandre Ayton said. “It was that type of game. Them dudes, they wanted it more. It was so tough because them dudes put a lot of pressure [on us] to where we weren’t getting into our offense. We were getting so many turnovers, they were on a fast break almost every other time down. We were discombobulated on the offensive end.”

Dallas outscored Phoenix 21-8 on the break.

“We were about as unorganized on offense tonight as we’ve ever been,” Williams said.

The last 2:34 of the first half sent the Suns into permanent catch-up mode. With Phoenix trailing by a seemingly manageable 9-point margin, Dallas rode an 8-0 run that gave it a 17-point edge with just 24.8 seconds before intermission, capped by Bullock nailing a running 24-footer to make the score 60-43.

Over that run, Luka dropped two dimes for five points as an inbounder, one to a cutting Bullock and the other to a wide-open Maxi Kleber for a 25-footer. Bullock knocked down Dallas’ final 3-pointer of the half in transition off an errant Paul pass.

Throughout the first two quarters, Dallas fired up more than three times the amount of 3-pointers (24) as Phoenix (seven), and connected on 10 of them, while the Suns made three of their attempts total. Phoenix also surrendered 12 points off eight turnovers in the opening half as Doncic, Brunson and Bullock combined for 41 of Dallas’ 60 points. The home team took a 15-point lead into intermission in front of a sellout crowd of 20,777 at American Airlines Center.

Reserve guard Spencer Dinwiddie showed up at just the right time for the Mavericks, after struggling throughout the first five games of this series. Dinwiddie hit just 28.9% and averaged 7.0 ppg in the series’ first five games before coming to life in Game 6 with a 5-of-7 shooting performance. All of Dinwiddie’s shots came from 3-point range for a series-high 15 points.