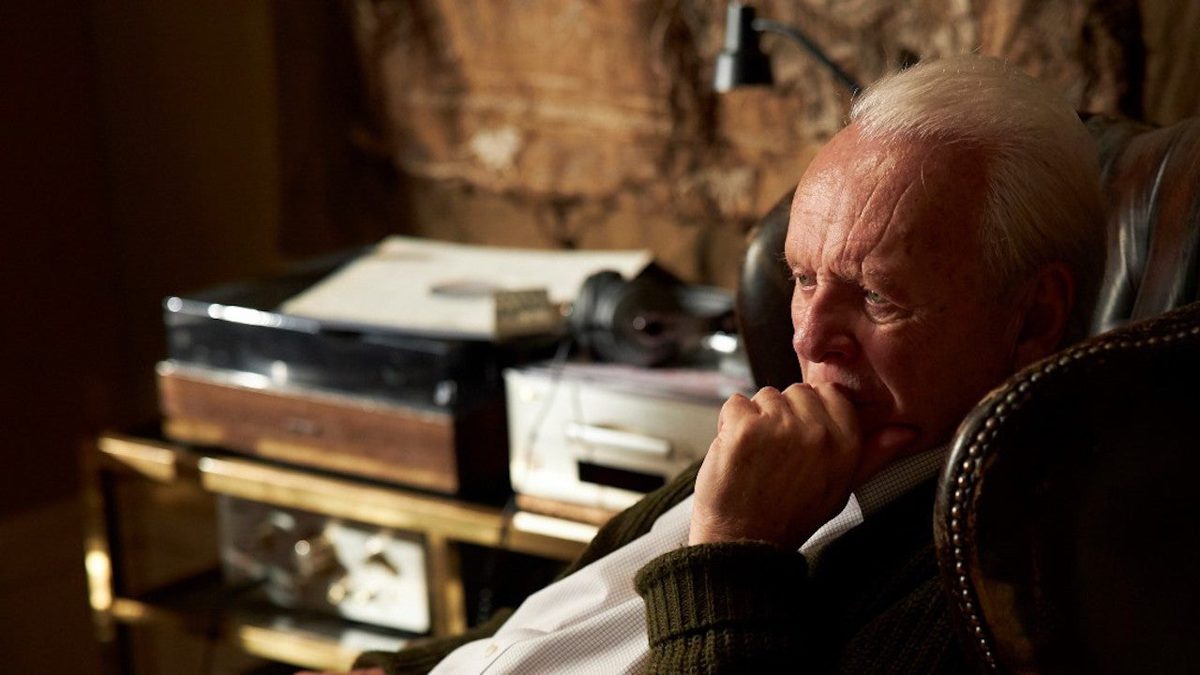 The Father is now available on premium VOD.

The Father is the first film by 41-year-old playwright Florian Zeller, though it feels like the work of a seasoned master in his twilight years. Based on Zeller’s French-language play Le Père and its English translation by Christopher Hampton — Zeller and Hampton also co-wrote the screenplay — the story follows retired London engineer Anthony (Anthony Hopkins) down a rabbit-hole of progressive memory loss, as his daughter Anne (Olivia Colman) attempts to care for him. The film turns its limited sets and spaces into a reflection of Anthony’s increasingly askew perceptions, filling the soundscape with the haunting strings of composer Ludovico Einaudi, and the disembodied echoes of conversations past. It’s a masterwork of both technical filmmaking and soulful drama, packed into a brisk 97 minutes that feels, by design, both like an eternity and like fleeting moments slipping through your fingers like water.

The Father has racked up six Oscar nominations. Its recognition in these categories — Best Picture, Actor, Supporting Actress, Adapted Screenplay, Editing, and Production Design — feels indicative of its precise assembly and conception. What the Oscars do and don’t get “right” is a matter of taste, but for an under-discussed, under-exposed contender like The Father, the nominations alone feel like justice served, regardless of who ends up winning. The Best Actor trophy will likely be awarded to the late Chadwick Boseman (Ma Rainey’s Black Bottom), and rightly so, but The Father also features a performance for the history books by the legendary Hopkins, who, at the age of 82, delivers arguably the most riveting work of his already storied career, a performance made all the more powerful by the way it’s framed.

What separates The Father from other films about aging is, for lack of a better word, its gimmick. The film seems to skip around in time as if to capture jumbled memories half-recalled, but it also roots its narrative in a singular, linear present, following Anthony across what feels like a couple of days, at least to him. It’s told mostly through his unreliable point of view, one filled with paranoia and frustration at the world around him, and at what he perceives as lies and patronizing deceptions. Before long, the film takes a sharp turn into eerie territory by suddenly recasting central roles, like Anthony’s daughter (Colman is, at one point, swapped out for Olivia Williams). A mysterious man even appears in his apartment — sometimes played by Mark Gatiss, other times by Rufus Sewell — claiming to be his son-in-law, and claiming that the apartment isn’t Anthony’s at all. It’s a trick so effective at robbing Anthony, and the viewer, of the luxury of recognition that you’re left wondering why more filmmakers don’t use it.

Zeller’s directing is economic — nearly every shot has a dual purpose, delivering emotional information through performance, and factual information framed in its peripheries — but it’s also fundamentally untrustworthy, placing us within Anthony’s headspace as he attempts to grasp his surroundings. When Anthony mentions some event or line of dialogue from earlier in a scene, the other characters suddenly have no idea what he’s talking about. If the film didn’t occasionally step back to present an “objective” vantage, it would feel like surrealist horror. Details subtly shift in his apartment, first in ways you don’t quite notice, but then in more sweeping and obvious ways that don’t make logical sense. The film features only a handful of locations, but it presents them remarkably, re-dressing and re-painting what appears to be a single set, so that as the story progresses, everything feels, at once, both alien and familiar.

Hopkins captures this conflict of perspective in heartbreaking fashion. In one moment, Anthony is bound by his convictions and has a temper to match them; “I am not leaving my flat!” he bellows, at the mere suggestion of assisted living. In the next moment, all sense of certainty slips away from him, which he tries desperately to conceal beneath a brittle veneer of confidence. His sentences begin with agreements, like “Ah, yes”, “Of course!” and “That’s right,” but the shudder in his voice, and the far-away look in his eyes, betray terror and self-pity.

However, Hopkins doesn’t simply play the dementia. Anthony isn’t his disease, but a fully formed person whose experiences and muddled memories keep fighting back against it, and against his fears of abandonment. As soon as he’s lucid, he takes immediate advantage of his physical and emotional clarity. For instance, when Anne introduces him to his new caretaker Laura (Imogen Poots), he jokes around and regales her with tall tales, and he even puts on a little tap dance, as if to overcompensate and prove just how in charge of his faculties he really is (finally, a film that taps into the wildly zany energy Hopkins brings to Instagram). But there’s a devastating irony even to his idiosyncrasies. The first thing you notice about Anthony — in fact, the first thing he’ll tell you — is how much he loves his wristwatch. It helps him keep track of his day and his routine, but it’s something he’s begun to misplace on a regular basis. Time itself is slipping away from him.

The film’s editing (by Yorgos Lamprinos) collapses days, minutes, hours, perhaps even months, into singular moments, as if no time has passed at all. Sometimes, the film even contorts chronology, as Anthony recalls conversations that haven’t happened yet or characters he’s yet to meet. This wouldn’t be possible without a sci-fi wrinkle in a straightforward narrative, but in The Father, it begs the question as to what we’re actually watching. A film, after all, is a memory of sorts — a reflection of past events unfolding in the present — and the more The Father goes on, the more it feels like the increasingly entangled recollections of a demented mind, where names, faces, and events are slotted in for one another if they’re remembered at all.

Witnessing events through Anthony’s eyes is often confusing and terrifying, but it becomes deeply upsetting in the rare moments the film slips out of his perspective, and into Anne’s. Colman plays a subdued counterfoil to the unpredictable Hopkins; where Anthony veers between jovial, brash, fussy, and distressed, Anne is forced to remain centered and calm, even as she navigates the realization that her father views her with suspicion and disdain. She barely keeps her head above water, and Colman wrestles, in grueling fashion, between a smiling, personable front and feeling piercing betrayal — which Anne chooses not to fully express. What would be the point, since Anthony seldom remembers the ways in which he hurts her?

As the scenes progress, and the film even loops back on itself on occasion, it’s hard not to wonder where a story like The Father is headed, or how it could possibly wrap up. It is, by nature, a tale of irrevocable, inevitable tragedy, with no relief or redemption in sight. However, its final scenes prove to be a stunning, soul-wrenching statement on memory, and its inherent contradiction as something both towering and impermanent.

Hopkins, in these closing moments, reaches deep into the depths of loneliness and despair. As an actor, he’s spent decades deconstructing human decisions and the ways people change, in increments. The skill with which he transitions from one thought or emotion to the next — reacting, considering, and feeling so fully as to seldom need words — makes him one of western cinema’s greatest performers. The Father is his magnum opus, allowing him to carefully strip away all dignity and civility from Anthony until all that’s left is a collection of primal impulses, and a living document of love, and care, at its most brutally difficult